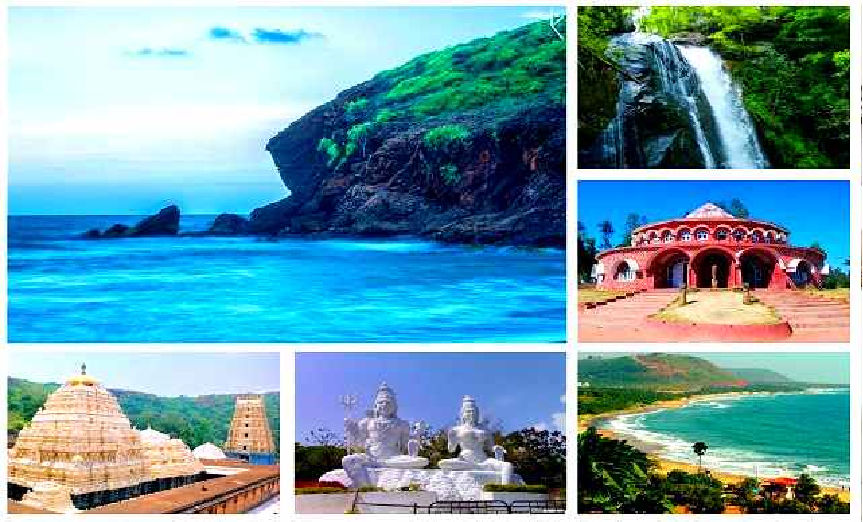 Are you planning a trip to Vizag? Here is the list of Vizag tourist places to visit when you are in Vizag. Visakhapatnam is a port city and industrial center on the Bay of Bengal in the Indian state of Andhra Pradesh. It’s famed for its beautiful beaches, notably Ramakrishna Beach, which is home to the Kursura Submarine Museum, which houses a preserved submarine. The magnificent Kali Temple is nearby, as is the Visakha Museum, a historic Dutch villa that houses local marine and other exhibits.

Vizag Tourist Places You Should Visit

Borra Caves, located approximately 1400 meters above sea level in Visakhapatnam’s Ananthagiri district, are home to stalactite and stalagmite structures as well as a natural enigma.

While wandering around RK Beach or driving down the beach road, you could come across a very elaborate collection of submarines. Take a look around Asia’s only Submarine Museum by stepping down.

Kailash Giri is a wonderful hilltop park among Vizag’s beautiful spots, located at a height of 360 feet. The park, which spans over 100 acres of lush green terrain, is situated on a hilltop. It gives breathtaking panoramic views of the surrounding area and the beach below. The highlight of the site is a pair of 40-foot white-painted sculptures of Shiva and Parvati.

Rishikonda Beach, also known as Rushikonda Beach, is located on the shore of Bay of Bengal. The APTDC, which is in charge of this natural treasure, has done an outstanding job of maintaining and preserving it. Rishikonda Beach is known as the ‘Jewel of the East Coast’ because of its natural and untouched beauty. The golden sands of the beach are cradled in the Rishikonda hill’s bosom.

Yarada Beach is a calm beach on the Bay of Bengal’s shore. It is close to Dolphin’s Nose. Here you can relax by the waves, sip soft coconut water, and occasionally play in the sea.

RK Beach is the most popular beaches of Visakhapatnam. It is a great place to unwind, take a stroll down the beach and sunbathe.

This 174 m high rocky headland, which resembles a dolphin’s nose, is located in the south of Vizag. The snout appears to protrude outwards towards the Bay of Bengal, giving it an intriguing appearance.

A 100-step climb and 2-kilometer hike will lead you to a spot. Here travellers will be treated to a breathtaking view of the Katiki Waterfalls.

Matsyadarshini is a stunning aquarium run by the Visakhapatnam Municipal Corporation. It houses innumerable types of fresh and saltwater marine life in glass tanks.

The Indira Gandhi Zoological Park is located in Visakhapatnam, Andhra Pradesh, in the Kambalakonda Reserve Forest. The Park, which first opened its doors to the public on May 19, 1977, presently has over 80 species of mammals, birds, and reptiles on display. Primates, carnivores, lesser carnivores, small mammals, reptiles, ungulates, and birds have their own areas within the Zoo Park, all of which are confined in their natural habitat. The Park, which is located in India’s gorgeous Eastern Ghats, is highly picturesque.

The Visakhapatnam Urban Development Authority park, often known as VUDA park, is a major tourist attraction in Visakhapatnam. A melodic waterfall is one of the main attractions here.

According to Hindu tradition, an east facing entry provides luck and prosperity, while a west facing entrance brings victory, therefore the Simhachalam temple is fortunate in that it faces west. The temple is nestled among cashew trees, shrubbery, and mango plantations on a hillside. On important and auspicious days, many people make the pilgrimage to the hill. Srinivasanagar, Prahladapuram, Sainagar colony, Simhapuri colony, and Simhapuri Layout are some of the nearby neighbourhoods. Because the trip is roughly 40 kilometres long, the trek frequently stretches into the night. Pilgrims come to the temple to make offerings to the gods of fortune.

Lambasingi, sometimes known as the ‘Kashmir of Andhra Pradesh,’ is a small hamlet in Chintapalli Mandal, in the lushly forested Arakku Valley, at an elevation of 1025 metres above sea level. The small village is famed for its towering hills, apple orchards, and panoramic vistas of the neighbouring valleys, and is one of Andhra Pradesh’s best kept secrets.

The settlement, also known as Korra Bayalu, is the only site in South India where snowfall occurs when temperatures drop substantially. Aside from the abundance of natural beauty and the stunning vistas of the towering hills and meandering rivers, the community also provides a variety of adventure sports. So, if you’re seeking for a cool breeze, hazy mists, vibrant gardens, and abundant natural beauty, you know where to go.

Bheemunipatnam Beach is a long, picturesque, and pristine beach located at the confluence of the Gosthani River and the Bay of Bengal. It also has the ruins of a 17th-century fort and cemetery, revealing history from the Dutch period.

The ‘Victory at Sea’ during the Indo-Pak conflict in 1971 is commemorated by this memorial. It is a well-known war memorial in Vizag, situated to the left of the beach road and facing the submarine museum. A fighter plane, missiles, a few bombs, and a tank are among the many war-related items on show.

Lawson’s Bay beach is frequently mistaken for an extension of Ramakrishan beach. With rich flora and whitish sands, it is a tranquil, serene, and secluded stretch. Swimming, sunbathing, and surfing are all possible in the magnificent sea, which has shallow crystal clear water and quiet waves.

On the outskirts of Visakhapatnam, the Kambalakonda Wildlife Sanctuary is a superb example of natural balance between the dry seasonal forest and the evergreen meadows.

Bojjannakonda is a tiny series of six rock-cut caverns with wonderfully carved Gautam Buddha images that attract tourists and believers due to their aesthetic and religious significance. Buddhist monks used to meditate in stupas in the caverns nearby.

Ross Hill Church is a magnificent site that attracts a huge number of tourists and religious adherents. It’s one of the few places where you can climb to obtain a great perspective of the charming city and the Port region. Photographers and nature lovers frequent the area, especially to see the stunning sunrises and sunsets. Ross Hill Church features lovely architecture and a peaceful atmosphere that will, at the very least, put a stop to your mind chatter for a few seconds. Tourists are welcome to see the church and attend prayer services or mass if they so desire.

Sagar Nagar beach is located on the coast of the Bay of Bengal in the picturesque area of Sagar Nagar in Visakhapatnam, Andhra Pradesh. The beach, which is one of the city’s most famous tourist attractions, reverberates with quiet and tranquillity. The beach is famed for its golden sands, mesmerising sunsets, and complete serenity, all without the commercial throngs or pollution that comes with tourism.

Buddhist excavations were found near Visakhapatnam at Havi Konda, Thotla Konda, Bojjana Konda, and Salihundam. Many Buddhist monuments, like as stupas and chaityas, were discovered during the 1906 excavations.

One of the town’s most attractive beaches, with palm palms and picture-perfect scenery, it attracts numerous film and television series producers. This beach, with its soft sands and gentle wind, has an isolated feel about it.

Waltair Uplands Road, Jagadamba Junction, CMR Central, Lepakshi Emporium, and other retail areas in Vizag are popular. The city is known for its saris, and styles such as Pochampalli, Ikat, and a few others are practically required.

On the route to the beach, travellers frequently stop by the Victory at Sea War Memorial, which is located on Beach Road. The monument has a pyre lit 24×7 in honour of the Indian martyrs. The well maintained monument often generates a sense of patriotism and pride in our countrymen who fight selflessly for the safety of our citizens.

Every year in April of the Gregorian calendar, the native tribal people of Araku Valley in Andhra Pradesh holds a hunting festival. The event is known as ‘Itika Pongal,’ and it is comparable to other tribal societies’ hunting holidays, such as Jharkhand’s ‘Jani Shikar.’

When the ladies of the tribe perform their traditional dance form, known as ‘Dhimsa,’ the ‘Itika Pongal’ festival provides as a perfect opportunity to experience Andhra Pradesh’s tribal culture in its purest form.

Please share your experience with BuzTak in the comments section.

Famous Historical Monuments of India Built by the British